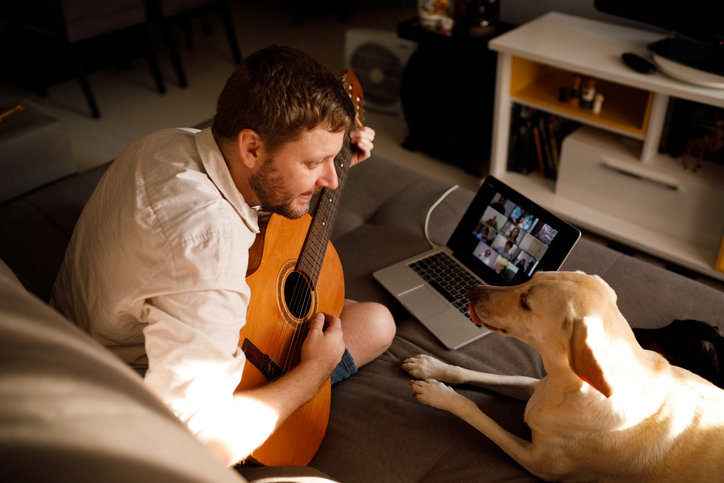 You’ve probably seen or heard of pregnant mothers playing Mozart to their bellies to help their child’s brain develop. Have you ever heard of someone playing music for their dog? Do dogs like music, and if so what kind of music is best for them? Let’s learn more about the relationship between dogs and music.

Music to Soothe the Soul

According to a 2002 study, music has the ability to affect a dog’s behavior. This study took place at an animal shelter where they played music for the dogs and recorded their behavior. When looking at 50 dogs, they found that some music would cause more barking and anxious behavior like pacing.

The study found that when the dogs were exposed to classical music, they were calmer and barked less. They also found that when heavy metal was played for the dogs, they would be much more vocal and move around more. With these results, the scientists recommended that the shelter continue to play classical music for the dogs. Not only did it calm the dogs down, it also made the overall atmosphere of the shelter a bit nicer. The potential buyers seemed to like the dogs more while they were calm as well, which could lead to more dogs being adopted.

While dogs seem to react to different kinds of music, do they actually view it as art? Is there a certain “spark” that dogs can get from music?

Dogs certainly don’t seem to have as complex a relationship with music as people do. There may be a reason for that too. Dogs are able to hear a much larger range of sounds. This is why a dog whistle works for dogs, but humans cannot hear it. Dog whistles sound at a frequency that is above the range the average human can hear.

Dogs can hear about twice as high a frequency as people can. What this also means is that they cannot as easily tell the difference between some frequencies. While humans can hear the differences between the notes in music, dogs will have a harder time. This seems to be why dogs respond to slower classical music by calming down. When the music is slow enough, they can actually sit back and enjoy it.

Playing heavy metal can put dogs in an agitated state. While it’s hard to tell if the dogs are simply critics, they may actually just be hearing “noise” since it might be harder to hear the differences between the notes.

Can I Use Music at Home?

Armed with this information, you can use music in your own home to help with your dog’s mood. If your dog suffers from anxiety, you can play music at certain times to help them relax. Common causes for anxiety in dogs include:

One of the best ways to help your dog reduce its anxiety is to provide them with a predictable routine. While they work within that routine, your dog can know what to expect. It may be difficult to control every aspect of your dog’s life though. If your dog becomes anxious when they hear the beep of a truck backing up, there’s little you can do to eliminate that sound from your dog’s life.

What you can do though is help your dog by blocking out those external stimuli. When you know that your dog is going to be put into a stressful situation, you can help them out by playing classical music for them. The music can help calm them if they are experiencing anxiety. Or the music can even help drown out sounds that may cause them anxiety.

It’s very important that you introduce your dog to music the correct way though. If you see your dog experiencing anxiety, you shouldn’t run to put the music on. This will lead to an association between the stimuli and the music. This can lead to the music causing your dog to have an anxiety attack. You’ll want to play classical music for your dog when they are already calm. This way they create positive associations with the music.