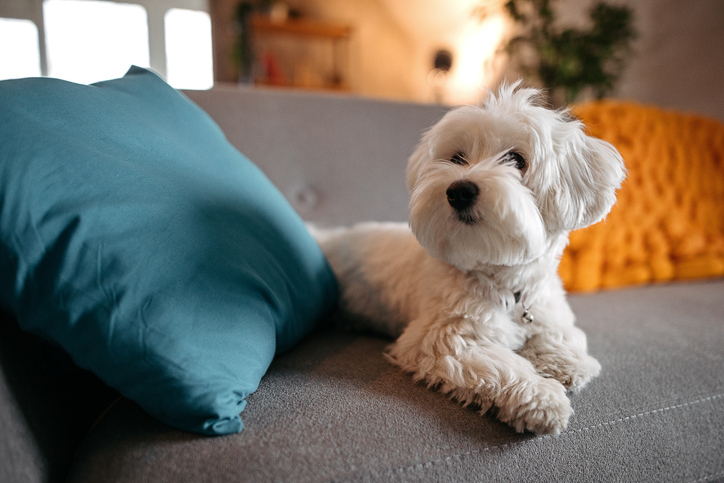 Should I let my dog on the couch? This is a question that many people ask themselves, and it can be difficult to come up with an answer. Today we will take a look at both sides of this debate and hopefully help you decide what is best for you and your pup.

The Great Debate: Should I Let My Dog on the Couch?

There are many reasons why you may or may not allow your dog on your couch. Let’s take a look at the pros and cons of this debate. There really isn’t one way that is better than another. You have to decide what works best for you in your home.

Reasons to Let Your Dog on the Couch

There are many reasons why you may want to allow your pup on the couch. Your dog will feel more at home and comfortable in their space if they’re allowed on the furniture where it’s usually forbidden for them. This could reduce barking, howling, and whining while also increasing a sense of security. Not letting your dog on the couch can make them seem like an outsider in their own home.

Letting your dog on the couch also enables older pets with painful joints or bones to be more comfortable. Pets with joint pain should avoid sleeping on firm surfaces because this can worsen chronic conditions like arthritis in older dogs. Sleeping on soft surfaces typically eases discomfort when joints become stiffer and less flexible due to age or illness.

Remember that the one caveat about letting your dog on the couch is that they should earn the privilege by being well behaved. Any dog that shows aggression while on the couch should be removed. You might even consider training in this instance as well.

Reasons Not to Let Your Dog on the Couch

While many people have decided that their dog should be allowed on the couch, there are owners that are opposed to the idea. The most common reason to not let your dog on the couch is cleanliness. Couch cushions can become easily soiled with dog fur and drool. A dog that plays in the backyard may also bring mud or pests in with them. If your dog is used to laying on the couch, they may think it’s alright to bring their chew toys or other treats up there and make a mess as well.

If you allow your dog on the couch, you’ll probably want to pay closer attention to their grooming as well. Even hypoallergenic dogs will shed a little hair, so keeping your dog brushed at least weekly can help keep your couch from getting covered with hair.

If you have decided that your dog should be allowed on the furniture, it can be a good idea to create an area for them on the couch or even just designate one cushion they are allowed to lay on. This will help keep your furniture cleaner and allow you easier access if there is an accident.

As a final tip, remember that you should only allow a trained dog to be on the couch. A dog should earn the right to be on a couch and you should extend the invitation to them. By keeping your dog trained, you can make sure they are respecting your decision. This will also allow you to get your dog off the couch without a fight.

If you have decided that your dog is not allowed on the couch, here are some things you can do:

Hopefully, you now have a better idea of how to manage your dog’s couch access and if you want your dog on the couch at all. There is no real “right” answer when it comes to your dog and your home, so go with whatever you feel comfortable doing.