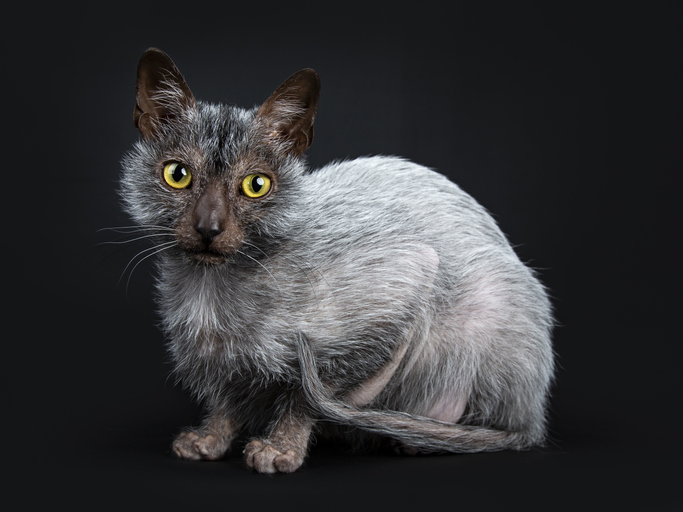 If you never have seen these unique creatures before, it is time for you to make acquaintance with the wolf cat. This relatively new breed in the feline world has the formal name of “Lykoi,” which means “wolf cat” in Greek.

Their unique hair pattern, or lack thereof, makes some believe they resemble a werewolf. They lack hair around their eyes, nose, and mouth, and the rest of their body only has patchy spots of hair without any undercoat. Some are completely hairless. They are of medium size, with a thin, toned body and a wedge-shaped head. Black or silvery in color, the wolf cat has round yellow eyes and long limbs.

The Lykoi cat came about in 2010 when a Sphynx breeder in Tennessee was granted a litter of kittens that were partially hairless. They were unique in that they were in no way genetically related to the Sphynx cat. Upon further research, it was determined that these kittens were a product of a genetic mutation that occurred naturally in domestic cats with short hair.

Wolf cats are healthy and energetic, despite the fact that they are unable to grow fur on certain areas of their body. They are loving, smart, loyal, and typically have an intense prey drive, which is why some wolf cat owners say that it has a personality similar to a dog. They are easygoing, which means they get along well with humans, dogs and other cats alike. They are kind to company but prefer affection from their close family the best.

Lykoi cats are only being bred in a handful of locations around the world, by blending them with black, domestic shorthair cats. The breeding of wolf cats is a bit controversial for several reasons. The first is that animal shelters are packed full of cats who need a home, and breeding a special type of designer cat is frowned upon by some for this reason.

Another reason some may disagree with the breeding of Lykoi cats is the superstition that many attach to black cats. They are often viewed as being scary or as giving bad luck to people. The fear is that the owner may eventually find the wolf cat unattractive or otherwise undesirable and it will end up in a shelter.

Even though the wolf cat doesn’t have a lot of hair, it sheds regularly. Brushing him or her 2-3 times a week is recommended. Giving them a monthly bath will keep their exposed skin clean and free of excessive oil.

If you are ready to have a cat that is a sweetheart and a real conversation starter, look no further than the Lykoi. Extremely rare, there are fewer than 100 show-standard wolf cats found across the globe today. Happy Halloween!