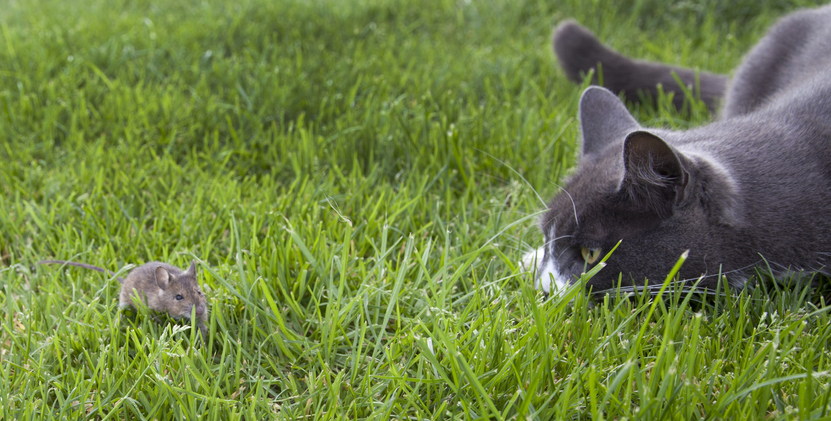 If you are a cat owner, you may be all too familiar with the experience of finding a dead mouse, bird or other small critter around your home. You may be wondering why your cat decided to kill and bring you in a trophy. Especially if you regularly feed him or her and give lots of attention. Why does your kitty feel the need to stalk prey? Why do cats hunt?

Why Do Cats Hunt?

Today, cats are our loving companions. Long ago, this was not the case. Before they were domesticated, they had to fend for themselves, hunting for their own food just like tigers and lions did. In fact, even after cats were domesticated, evidence shows that they continued to hunt, by feeding on rodents that were eating our grains.

The domestic cat of today hunts for fun and entertainment, as opposed to survival. However, hearing or seeing prey activates the hunting instinct found within your cat and it just can’t resist the temptation when a little creature comes along.

How Do Cats Learn to Hunt?

In nature, hunting is learned by cats from their mothers. It is then reinforced and then actuated by playing with their brothers and sisters. However, even kittens who never saw their mom hunt will still instinctively know how to do it. Some cats work on their hunting practices by trying to catch a fly or playing with their toys. Other cats who are let outdoors will show their skills by bringing larger prey such as mice and birds to your doorstep.

The Way That Cats Hunt

Cats begin by seeking out potential prey in their immediate environment, Next, they will slowly stalk the animal until they are close enough to pounce on it and grab it. Before killing it, they may decide to play with it first. This may depend on how hungry they are, and also how large the animal is. Cats play with their prey in order to cause the animal to grow tired and confused. This makes it easier to kill the prey, without the cat having to risk getting injured. In the end, your cat might decide they don’t want to kill the prey at all.

Is My Hunting Cat Hungry?

Logically, you may be worried that your hunting cat is doing so because you are not giving them enough food, or something of that nature. Not to worry, only about 30% of what cats trap and kill gets eaten by them. For cats to catch enough prey to keep them alive, they would need to catch and eat about 10-20 animals a day. That would be very difficult for them to do, since only about 50% of their hunting attempts turn out to be successful. Hunting in cats is more of an activity than an attempt to eat.

Is My Cat Trying to Impress Me With Gifts?

When you see your cat deliver a small dead animal to you, it is fun to assume that she is doing it to show you what a good hunter she is, or to bring you a present. Experts suggest that cats do this for the same reason that they bring food to their young, to teach them survival skills. Another possibility is that she may be trying to give you her snack so she can save it for later.