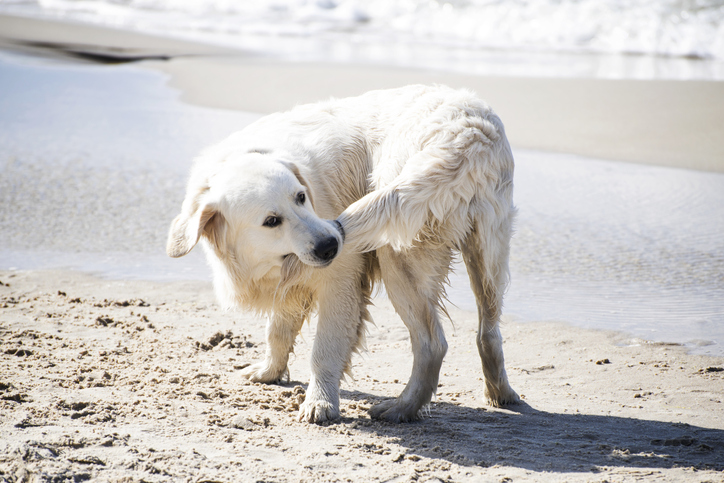 If you have ever seen a dog chase its tail, you likely were amused by it or were concerned about what was causing this quirky behavior. Perhaps it left you wondering, why do dogs chase their tails? Let’s explore what the experts have to say on the subject of tail chasing in dogs.

The reality of the situation is that your dog just might be bored. Perhaps they aren’t getting enough exercise or mental stimulation. This may be especially true for dogs that spend a lot of time on the couch.

Chasing their tail provides them with an outlet for all of the extra energy they have that is just waiting to come out.

If you feel that boredom is the reason that your dog chases its tail, be sure that your dog is getting enough exercise. Take them on a nice, long walk at a time of day that isn’t too hot. Wearing your dog out with exercise will likely help them to drop the habit of tail chasing.

They Are a Puppy or a Senior Dog

Part of being a puppy is exploring its own body and the world around him. It is naturally curious about this appendage known as a tail, which seems to follow him around and have a mind of its own. It’s no wonder that many puppies enjoy trying to catch their tail.

On the opposite end of the spectrum, some older dogs chase their tails as well. This habit may be due to a cognitive defect. If your senior dog is chasing its tail, speak to your veterinarian about what step to take next to remedy the situation.

Many people begin to laugh when they see a dog chasing its tail. The dog may then see this as a positive affirmation that he is doing a good thing, and pleasing his owner. Therefore, he keeps repeating the behavior.

Even if you decide to scold your canine when it chases its tail, he still sees this as attention, which is what he wants. This satisfies him too. In order to help stop your dog from chasing its tail, you should do your best to ignore the behavior.

They Could Be Ill

If your dog has never chased or bitten its tail before, and out of the blue he starts doing it, go ahead and make that vet appointment. This is because when a dog feels pain, he may begin to chew at the area.

Another reason your dog may be chasing his tail is that he has parasites. These parasites, which cause itching in the rectum, can cause dogs to start spinning around.

Fleas around the tail area or food allergies may also contribute to your dog chasing its tail.

If your dog’s tail chasing has turned into an obsessive behavior, don’t hesitate to seek professional help from your vet and/or animal behaviorist.